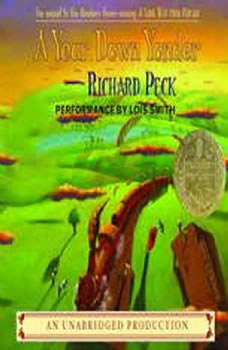 A Year Down Yonder

Mary Alice and Grandma Dowdel return for more astonishing, laugh-out-loud adventures when fifteen-year-old Mary Alice moves in with her spicy grandmother for the year. Her extended visit is filled with moonlit schemes, romances both foiled and founded, and a whole parade of fools made to suffer in unusual (and always hilarious) ways.

Beezus and Ramona
by Beverly Cleary

Big sister Beezus Quimby tries to be patient with her four-year-old little sister, Ramona, but it isn't easy, not when Ramona powders her nose with marshmallows and invites her nursery school class to a party without telling her family. Sometimes B...

A Long Way From Chicago
by Richard Peck

What happens when Joey and his sister, Mary Alice--two city slickers from Chicago--make their annual summer visits to Grandma Dowdel's seemingly sleepy Illinois town?August 1929: They see their first corpse, and he isn't resting easy.August 1930: Th...

Ramona the Brave
by Beverly Cleary

Ramona is happy to have a new bedroom all to herself—during the day, at least. It's not as easy to be brave when there might be ghostly, boneless gorillas oozing under the door at night. Then there is the big, mean dog that steals Ramona's sh...

Sometimes life in the Hatcher household is enough to make twelve-year-old Peter think about running away. His worst problem is still his younger brother, Fudge, who hasn't changed a bit since his crazy capers in Tales of a Fourth Grade Nothing. If y...

In her own singularly beautiful style, Newbery Medal winner Sharon Creech intricately weaves together two tales, one funny, one bittersweet, to create a heartwarming, compelling, and utterly moving story of love, loss, and the complexity of human e...

Ramona's job is to be nice to fussy Mrs. Kemp, who watches her while her mother works. If Mrs. Quimby didn't work, Mr. Quimby couldn't return to college. On top of all that, third grade isn't turning out as Ramona expected, even though she enjoys h...

Ramona and Her Mother
by Beverly Cleary

Ramona feels this is the awkward age—too little to stay by herself after school when her mother is at work, but too big to enjoy playing with pesty Willa Jean at her sitter's house. These days, all Ramona really wants is to twitch her nose an...