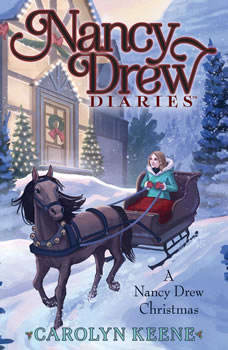 Nancy finds herself a Christmas mystery in this super special eighteenth book of the Nancy Drew Diaries series, a fresh approach to the classic mystery series. Nancy Drew&rsquo;s dad surprises her with a trip to a beautiful New England ski resort for Christmas break. Nancy is so excited. What could be better than a whole week of skiing and five-star dining? But no vacation can go smoothly when Nancy is involved. On her very first run down the slopes, Nancy hits a bad patch of ice and takes a serious tumble. A doctor sends her back to the hotel in a cast and mandates twelve days of bed rest. That means no long car trips back to River Heights and twelve days of sitting around. Luckily, there&rsquo;s still the five-star dining and beautiful views. Just hours into her convalescence, Nancy witnesses something very suspicious through another hotel room window. And when she presses the concierge she learns there have been mysterious break-ins throughout the hotel. It&rsquo;s clear someone has been going into guest&rsquo;s rooms but, as far as anyone can tell, nothing has been taken. Nancy can&rsquo;t resist&mdash;she has to investigate. Only trouble is, she&rsquo;s still bed bound. Taking some cues from&#160;Home Alone&rsquo;s Kevin McCallister, Nancy devises some clever schemes to get her investigating done from her bed. But for all her plans, Nancy still can&rsquo;t find the source of the break-ins. Or the purpose. What&rsquo;s worse the mood of the hotel has turned decidedly un-merry. People are leaving in droves and the jolly hotel owner is worried about the hotel&rsquo;s success. With all the odds stacked against her, can Nancy solve this crime in time to save Christmas? Or is this one Yuletide she&rsquo;ll wish to forget?