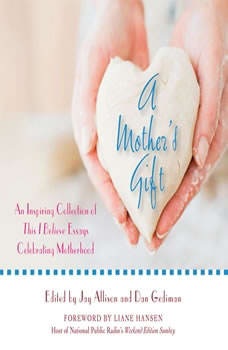 A Mother's Gift: An Inspiring Collection of This I Believe Essays Celebrating Motherhood

Author: This I Believe

An inspiring collection of the personal philosophies and core values of a fascinating group of Americans with a focus on motherhood. The perfect Mother's Day gift. Based on the NPR series of the same name, this new 1-CD collection of This I Believe essays will again gather a diverse group of essayists—ranging from famous to previously unknown—completing the thought that begins the book's title with respect to mothers and motherhood. The result will be another stirring and provocative trip inside the minds and hearts of people whose beliefs—and the remarkably varied way in which they choose to express them—reveal the American spirit at its best.Essays, compiled from the first two This I Believe audiobooks, include:* In Giving I Connect With Others by Isabel Allende* There Is No Job More Important Than Parenting by Benjamin Carson* The People Who Love You When No One Else Will by Cecile Gilmer* When Children Are Wanted by Margaret Sanger* The Person I Want To Bring Into This World by Laura Shipler Chico* There Is No Blame; There Is Only Love by Ann KarasinskiThis collection makes the perfect Mother's Day gift.