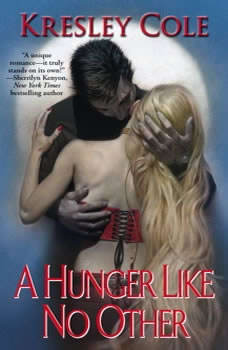 Acclaimed author Kresley Cole introduces a sizzling new series with this tale of a fierce werewolf and a bewitching vampire -- unlikely soul mates whose passion will test the boundaries of life and death. A mythic warrior who'll stop at nothing to possess her . . . After enduring years of torture from the vampire horde, Lachlain MacRieve, leader of the Lykae Clan, is enraged to find the predestined mate he's waited millennia for is a vampire. Or partly one. This Emmaline is a small, ethereal half Valkyrie/half vampire, who somehow begins to soothe the fury burning within him. A vampire captured by her wildest fantasy . . . Sheltered Emmaline Troy finally sets out to uncover the truth about her deceased parents -- until a powerful Lykae claims her as his mate and forces her back to his ancestral Scottish castle. There, her fear of the Lykae -- and their notorious dark desires -- ebbs as he begins a slow, wicked seduction to sate her own dark cravings. An all-consuming desire . . . Yet when an ancient evil from her past resurfaces, will their desire deepen into a love that can bring a proud warrior to his knees and turn a gentle beauty into the fighter she was born to be?

No Rest for the Wicked
by Kresley Cole

The second installment in Kresley Cole’s bestselling steamy Immortals After Dark series is now available on audio for the first time!Centuries ago, Sebastian Wroth was turned into a vampire—a nightmare in his mind—against his will....

This is my first book by Kresley Cole, and it won't be my last! This book was really terrific. I haven't read a lot of romance books with mythical creatures, but it was quite entertaining. I like that it is written in contemporary time with references to IPods and such. Cool! The love that Lachlain felt for his Emmaline was soooooooooo romantic! I can't wait to read the next book in this series.

This is one of my fav Kresley Cole books. Awesome from the beginning all the way to the end. Feel in love with the characters, hated for the book to end.