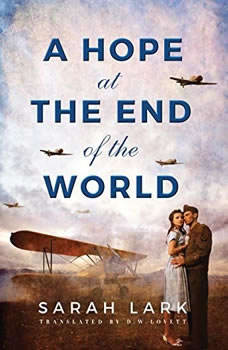 A Hope at the End of the World

In the chaos of World War II, Polish teenagers Helena and Luzyna Grabowski have lost everything. Without parents or a home, they are shipped to a refugee camp in Persia, where the days ahead hold only darkness. When they hear that orphans are being selected for relocation to New Zealand, Helena is filled with hope—until the officials say they have a place only for her younger sister.On the morning she is to be transported, Luzyna fails to join the chosen group, and Helena takes her place. But the horrors of war—and her guilt at abandoning her sister—follow Helena on the journey across the sea, as a man from her past preys on her fear and remorse.Though the people in New Zealand embrace her, the traumas Helena has suffered threaten her peace and blind her to the devotion of James, a charming, heroic young Allied pilot. If Helena can let go and dare to hope again, she may finally step out of the long shadow of her past to find a future made whole—a new community, a new family, a new love.