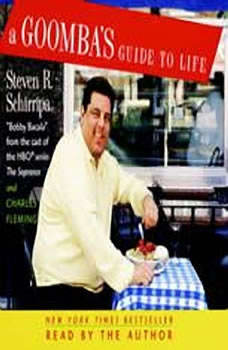 A Goomba's Guide to Life

Attention would-be paesans: Can’t distinguish “gabagool” from “pasta fazool”? Not sure how to properly accessorize your track suit with gold chains? Does the phrase “go to the mattresses” make you sleepy? Now Steven R. Schirripa, The Sopranos’ own Bobby Bacala, exposes the inner mysteries of this unique Italian-American hybrid in A Goomba’s Guide to Life so that anyone can walk, talk, and live like a guy “from the neighborhood.”

Über-goomba Steve Schirripa shows how being a goomba made him what he is today, offering lessons learned on his own journey from Bensonhurst to Vegas, and to his current gig as Bobby Bacala on one of TV’s most popular shows. Along the way, he shares secrets that will help you get in touch with your own inner goomba. You’ll learn what music to enjoy (Sinatra, yes; Snoop Dogg, no), what movies to watch (Raging Bull, yes; Titanic, never), which sports to follow (baseball is good; golf and tennis, fuhgeddaboudit), and even tips on goomba etiquette. Ever wonder how a real goomba gets the best seat in the house? (Hint: It involves tipping, jewelry, and intimidation.) Schirripa even includes goomba do’s and don’ts (never, ever criticize a goomba’s mother or her gravy; always wear more jewelry than you think you need).

With knockout photographs of Schirripa and his compares, and insider information on how to think goomba, speak goomba, cook and eat goomba, and even how to behave at goomba weddings and funerals, A Goomba’s Guide to Life will show any wiseguy wannabe how to sing like a Soprano.