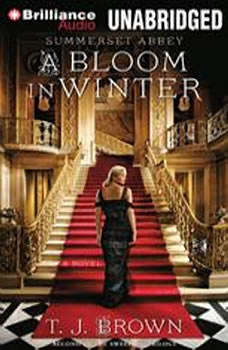 A Bloom in Winter

As the icy chill of winter, 1914, settles on the magnificent country estate of Summerset Abbey, three young women seek comfort and warmth in the smiles of friends, the fire in their hearts, and the promise of spring….Victoria BuxtonWith her delicate constitution but strong, unflappable spirit, Victoria has never followed societal conventions, the rules of fashion, or the pursuit of a husband. Instead, she finds herself drawn into the controversial—and dangerous—fight for women’s suffrage. But her dream is compromised, and her heart divided, when her struggle for equal rights collides with unexpected love.Rowena BuxtonAfter yearning to no avail for a certain young pilot to fly back into her life, Rowena fears her chances for happiness have been jeopardized by recklessness and scandal. Burdened with guilt for bringing her sister Prudence to Summerset Abbey as a lady’s maid while she herself led a life of privilege, Rowena hopes to one day make amends. But her desire to set things right is complicated by her passion for flight and a sudden engagement…to the wrong man.Prudence TateRaised like a sister to Victoria and Rowena, then banished to the servants’ quarters when their father passed away, Prudence has seen both sides of life, upstairs and down. But once the truth about her parentage was revealed, Prudence forged a new life for herself, married to a penniless veterinary student. Living in poverty in a shabby London flat, she wonders if she’s made a terrible mistake—and there’s no turning back….