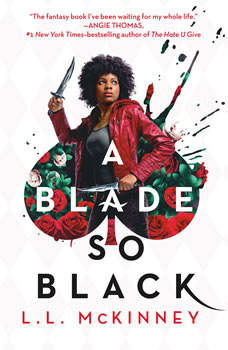 A Blade So Black

Series: A Blade So Black #1

"With memorable characters and page-turning thrills, A Blade So Black is the fantasy book I've been waiting for my whole life. Alice is Black Girl Magic personified." —Angie Thomas, #1 New York Times-bestselling author of The Hate U GiveA Blade So Black delivers an irresistible urban fantasy retelling of Alice in Wonderland . . . but it's not the Wonderland you remember. The first time the Nightmares came, it nearly cost Alice her life. Now she's trained to battle monstrous creatures in the dark dream realm known as Wonderland with magic weapons and hardcore fighting skills. Yet even warriors have a curfew.Life in real-world Atlanta isn't always so simple, as Alice juggles an overprotective mom, a high-maintenance best friend, and a slipping GPA. Keeping the Nightmares at bay is turning into a full-time job. But when Alice's handsome and mysterious mentor is poisoned, she has to find the antidote by venturing deeper into Wonderland than she’s ever gone before. And she'll need to use everything she's learned in both worlds to keep from losing her head . . . literally.Debut author L.L. McKinney delivers an action-packed twist on an old classic, full of romance and otherworldly intrigue. An Imprint Book"Mixing elements of Alice in Wonderland and Buffy the Vampire Slayer... a delectable urban twist on beloved fairy tales." —Entertainment Weekly"A thrilling, timely novel that ensures readers will be curiouser for a sequel." —Kirkus Reviews

Granting Wishes (A Once Upon a Curse Prequel)
by Kaitlyn Davis

Parting Worlds (Once Upon a Curse Book Four)
by Kaitlyn Davis

**A USA Today Recommended Series!**She'll risk it all to be with the man she loves… Don't miss PARTING WORLDS, a fantasy romance from bestselling author Kaitlyn Davis that reimagines the classic fairy tale of The Little Mermaid."I know humans...

Not Cinderella's Type
by Jenni James

Indy Zimmerman has a new stalker who won't leave her alone, no matter what she says to him. Never mind the fact that he's one of the most popular guys at school—she's positive Bryant Bailey is only trying to appease his own conscience after pr...