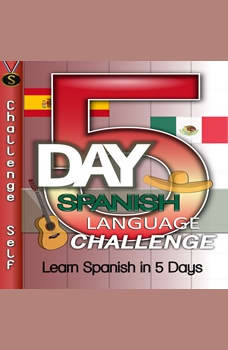 *You MUST download the accompanying reference material PDF in order to go through the audiobook.Learn Spanish with Your "5-Day Spanish Language Challenge"Why are you reading this? Because:- You want to speak the second most popular language in the world.- You want to be able to visit the different Spanish-speaking countries.- You want to know how to better communicate with Spanish speakers.- You want to have the chance to further advance your career in the USA.- You want to have the easiest and fastest way to study Spanish for beginners.Spanish is one of the most widely spoken languages in the United States and in many countries. In fact, it has the second largest number of speakers on this planet—right after Chinese.Now many folks have taken some kind of foreign language when they are in school, but if you didn't get the opportunity to study Spanish—it’s not too late.There are many advantages that you will find to learning another language, especially one that is as widely spoken as Spanish:Travel – If you travel to a Spanish-speaking country, having a rudimentary idea of the language will help you get around and get along with those who live there. You will know where to go and look less like a tourist. When you are lost or need information, you can ask anyone in their own language and understand them.Business – If you have a business, knowing how to speak multiple languages can increase your bottom line. Sometimes you will have a client who only speaks Spanish, and knowing Spanish will help you be able to communicate and connect with them.Job Opportunity – When you are looking for a job, being bilingual can help you tremendously with standing out and having a better chance of being hired. It shows potential employers that extra value you have to offer for their expansible customer base.So, if you are looking for a simple way to learn Spanish in only a few days, our "5-Day Spanish Language Challenge" will set you on your path to success!

Now you can greatly improve your Spanish listening skills with short stories specially designed to help you practice Spanish by listening using vocabulary that you can actually use every day, This short novel is read in easy spanish because it is no...

Baby’s First Words in Spanish introduces your baby to the Spanish language through sweet and soothing songs, rhymes, and words. Decades of research prove that the first two years of a baby’s life are the crucial time to expose him or her...

Behind the Wheel Express Spanish covers beginning to intermediate level Spanish, providing a flexible, solid and universal foundation in speaking, understanding, and creatively expressing yourself in Spanish. The program features an English speaking...

Behind the Wheel Express French covers beginning to intermediate level French, providing a flexible, solid and universal foundation in speaking, understanding, and creatively expressing yourself in French. The program features an English speaking in...

Behind the Wheel Express Italian covers beginning to intermediate level Italian, providing a flexible, solid and universal foundation in speaking, understanding, and creatively expressing yourself in Italian. The program features an English speaking...

Learn Spanish in a whole new way, based on up-to-date understanding of linguistics and learning psychology. Drawing on the best innovations in language instruction of the last 40 years, Dr. Blair's method integrates a variety of language-teaching ap...

THE EASY READER SPANISH AUDIO COURSE NO. 1 EASY LISTENING - EASY READING - EASY LEARNING This is our ultimate Spanish learning course yet. Are you relatively new to learning Spanish or need to brush-up on your language skills? You wish to not onl...

Learn all of the words and phrases a traveler needs to know! eTicket Spanish is a simple and practical Latin American Spanish audio phrasebook that covers all of the travel essentials. You’ll be able to greet people, ask for directions, order ...