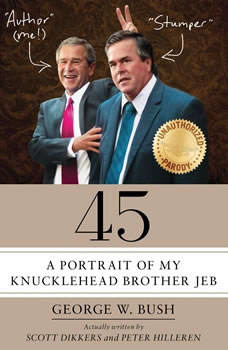 45: A Portrait of My Knucklehead Brother Jeb

An irreverent take on the national bestseller 41: A Portrait of My Father by George W. Bush, 45 is a no-holds-barred tell-all written in the voice of former president George W. Bush as he stumps for his brother Jeb--perhaps doing more harm than good. In 45: A Portrait of My Knucklehead Brother Jeb, George W. Bush takes readers on a journey through his "butt-faced kid brother's" life, detailing the experiences that forged his presidential character, and in his own plainspoken and sometimes even comprehensible style, showing us why the younger Bush should be the next leader of the free world. And while he definitely wants Jeb to be commander-in-chief, he just can't stop razzing him either. 45 is the most hilarious (and backhanded) presidential endorsement you've ever read--a true literary noogie from one brother to another.