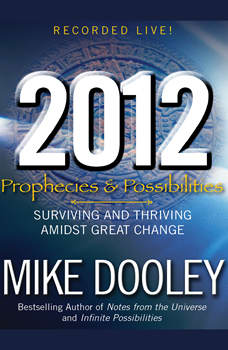 2012: Prophecies and Possibilities: Surviving and Thriving Amidst Great Change

UNAVAILABLE IN BOOK FORM! A live recording of Mike Dooley’s vision of the challenges and opportunities that lie ahead     2012, which many believe will be a vital turning point in our world’s consciousness and fortunes, is already the focus of much speculation and concern in print and on the Internet. But none of the books, articles and websites approach the topic with the upbeat, prescriptive perspective that Mike Dooley, bestselling author of Notes from the Universe and Infinite Possibilities brings to the topic in 2012: Prophecies & Possibilities.   This live recording captures an evening with Mike Dooley in which he shares what the prophecy makers actually “saw” concerning the year 2012, what’s already happening in the world, the biggest hurdle now before each and every one of us, and five tips for thriving amidst great change. With the same insightful, inspiring style that distinguished him as a teacher in the global phenomenon The Secret, Dooley expands the discussion of 2012 to include the concepts of: • the evolution of consciousness • inner and outer storms • how we got to this crossroads in time • understanding our supernatural powers and responsibilities • how to engage life’s magic and leverage the forces of change that are already sweeping the globe!   2012 is fast approaching, and Mike Dooley wants us to recognize that moments of great change offer the greatest possibilities, but it is up to us to see the positive power of these moments and seize those opportunities.